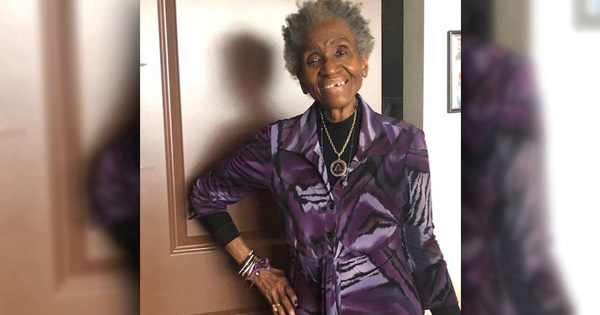 St. Louis, MO — Jessica Slaughter, an 86-year old grandmother from Missouri who suffered from obesity when she was young, has discovered her own successful formula for weight loss. Since she became vegan and has been taking 3,000 steps in her apartment daily, she lost 120 pounds and felt healthier than she had ever been!

Slaughter said she was struggling with obesity and prediabetes since elementary days.“Even as a kid in Mississippi, I was always the fattest kid in the class. I got teased a lot,” Slaughter said in an interview with KSDK. “I didn’t know how to stop eating. Fried chicken. Bacon and eggs. Desserts, like cakes and pies.”

But not until she turned 70 years old and she stopped eating meat. She also walks back and forth his living room to her kitchen in her one-bedroom apartment for a total of 3,000 steps daily.

“I went to my doctor for a checkup. He told me my health was better than his,” she said. “I was a borderline diabetic. I’m free of all that, and I know it came from my way that I eat and exercise.”

Slaughter has recently incorporated technology into her routine after her granddaughter suggested she get a Fitbit, a daily activity tracker, to help her monitor her steps during her morning walks.

Slaughter hopes to be an inspiration to her fellow seniors in making a change for a healthier lifestyle, even small ones.

“I just want seniors to know just because we’ve gotten a certain age, we don’t have to stop living,” she said. “I want to tell them that there’s a better way of life if they choose.”

African American in Africa: The Reasoning

African American in Africa: My Path to Namibia

The Cost of Living in Namibia: Housing

Asteroid That Hurtled Past Earth Has a Miniature Moon

BCN Staff - January 27, 2015 0
An asteroid that hurtled past Earth at a distance of 745,000 miles on Monday brought along a surprise — a small moon that scientists detected orbiting...

Relationship 101: 7 Things to Expect When Dating a Thug