Have Jay-Z, Common, and Russell Simmons become the leaders of th 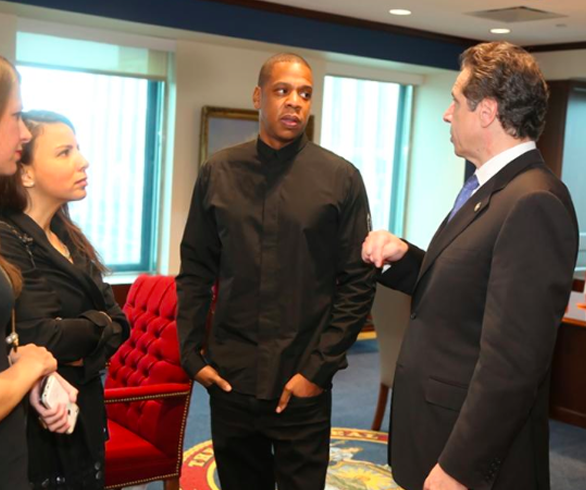 With all the protests surrounding the killings of unarmed Black men, many people have been wondering where the Black celebrities were and why weren’t they using their power to promote change. On Wednesday three members of the hip hop elite—Jay-Z, Russell Simmons and Common—met with government officials and came away with an important promise from New York Gov. Andrew Cuomo.

“We want to promote the end of police protecting police and not prosecuting police,” Simmons said.

Common said America “should be ashamed of itself. We’re going to do everything it takes to change this system,” according to AP.

During the meeting with Simmons, Cuomo pledged to order that special prosecutors will be appointed to deal with police brutality cases, according to AP. It is a measure that many activists in New York and around the country have been calling for—and something Cuomo refused to do in the Eric Garner case, which resulted in the Staten Island District Attorney failing to get an indictment.

“We’re going to hold him to it,” Simmons said of Cuomo’s pledge.

Cuomo’s spokeswoman Melissa DeRosa said that the conversation dealt with discussions of special prosecutors among a “range of options that could be included” and other policy changes that governor plans on working on over the next year.

Jay-Z’s spokeswoman confirmed that he and Cuomo met with each other and DeRosa expressed that they had “a productive conversation” about reviewing and reforming the criminal justice system.

The trio didn’t just stop with the New York governor.

Simmons also had conversations with Mayor Bill de Blasio, and Simmons and Common worked with activist group Justice League NYC on Wednesday to promote the firing of officers involved in the Garner case and the appointment of special prosecutors for all cases involving police brutality.

2019 Marks the 100th Anniversary of the Elaine Phillips Massacre