“The Cosby Show” – Is The Image Shattered 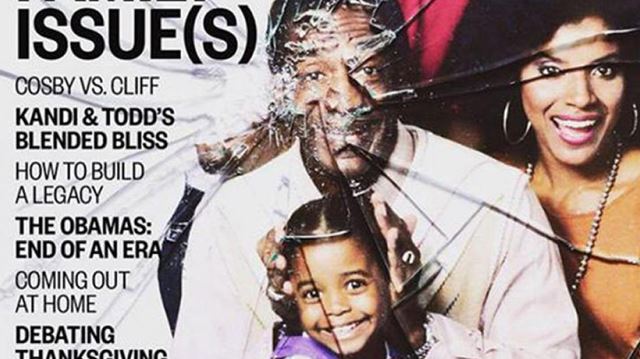 Nationwide — Ebony Magazine, one of the oldest and most respected African American publications, has shattered America’s favorite Black family. The November 2015 issue features a 20-year old picture of the Huxtables from the infamous “Cosby Show”, but in the picture, Bill Cosby’s smiling face is obscured by broken glass. Inside, readers will also find an intense, no holds barred article entitled, “Cliff-Hanger: Can ‘The Cosby Show’ Survive? Should It?”.

The cover, although controversial, does reflect in reality what has happened to Cosby’s clean image after more than 50 women have recently accused him of drugging and raping them over the past four decades.

Kierna Mayo, editor-in-chief, commented, “I believe with everything that our collective healing (from this and all traumas) is tied to baring truths, confronting selves, and dismantling crutches. We aim to uplift. However, sometimes before you rise up, you break down.”

She told CNN, “Neither Cosby nor his effect on black America, good or bad, can be ignored.” She continued, “Ebony is not shattering anything. We’re just asking African Americans to have an honest, forthright conversation about what (the Cosby scandal) means.”

Meanwhile, social media has been set afire. On the magazine’s Facebook, Instagram and Twitter pages, all sorts of comments and tweets can be found. People’s reactions range from: “Who cares?” to “How could you?” to “It’s about time!”

For more details and/or to read the controversial issue, visit:
www.ebony.com/entertainment-culture/ebony-bill-cosby-cover-story-november-2015-999