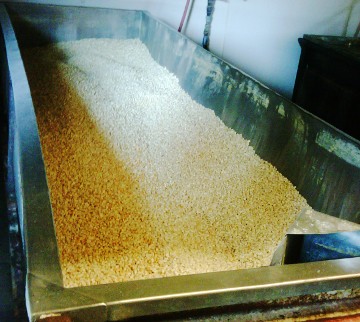 The commonly used ingredient high fructose corn syrup (HFCS) has been linked to numerous health issues, leading countless individuals to shun any products containing the ingredient. Well new research shows that this is in fact the right move, finding that consuming high fructose corn syrup in ‘normal’ quantities is more toxic than sucrose or table sugar, leading to a reduced lifespan and hampered reproduction.

The study showed that when fed a diet containing 25% of calories from added fructose and glucose carbohydrates found in corn syrup, female mice died at a rate 1.87 times higher than female mice on a diet in which 25% of calories came from sucrose (table sugar). What’s more, the mice on the fructose-glucose diet produced about 26% fewer offspring.

“This is the most robust study showing there is a difference between high-fructose corn syrup and table sugar at human-relevant doses,” says biology professor Wayne Potts, senior author of a new study scheduled for publication in the March 2015 print issue of The Journal of Nutrition.

The research, funded by the National Institutes of Health and the National Science Foundation, is among the first to differentiate between the effects of the fructose-glucose mixture found in corn syrup and sucrose, or table sugar, said University of Utah biology professor Wayne Potts, senior author of the paper.

Potts says the debate over the relative dangers of fructose and sucrose is important because:

“…when the diabetes-obesity-metabolic syndrome epidemics started in the mid-1970s, they corresponded with both a general increase in consumption of added sugar and the switchover from sucrose being the main added sugar in the American diet to high-fructose corn syrup making up half our sugar intake.”

But this may not even be the most concerning news regarding the ingredient. In light of recent research on HFCS, it’s important to look back at one landmark study that revealed the presence of ultra-toxic mercury within the ingredient. Mercury is, as all of the experts admit, toxic in all of its forms. And as the study by the Institute for Agriculture and Trade Policy found, nearly a third of 55 popular brand-name food and beverage products that listed HFCS as the first or second ingredient were found to contain it.

Yet food corps are still trying to peddle HFCS-containing products on the public despite it being a health threat. They are even renaming the ingredient as to trick consumers, as a growing number of people are refusing to buy HFCS-laden food products.

In fact, individuals are steering away from sugar in general more than ever as the ingredient is quickly becoming known as a primary culprit when it comes to the development of nearly all disease. It even fuels cancer almost like no other substance we are consuming, and should be completely avoided to starve cancer cells.

James Ruff, the study’s first author and a postdoctoral fellow in biology, says:

“Our previous work and plenty of other studies have shown that added sugar in general is bad for your health. So first, reduce added sugar across the board. Then worry about the type of sugar, and decrease consumption of products with high-fructose corn syrup.”

86-Year Old Woman Loses 120 Pounds by Changing Her Diet and Taking 3,000 Daily Steps in Her Apartment